As many of you know, when I was still teaching, I also coached basketball.  In one of the first seasons I was coaching, I attended a coaching clinic.  I learned a ton that day, but one of the things that has stuck with me even beyond my time as a coach was probably a throw away comment by one of the assistant coaches about John Wooden – one of the greatest college basketball coaches of all time.  During the clinic we were talking about a variation on Coach Wooden’s famous secondary break, and someone mentioned one of Wooden’s books.  I jotted a note to myself, and ordered it from Amazon later.  When it arrived, I expected a book with information about various plays and strategy – after all it is a book on coaching.  What I found however, was that the majority of the book was on coaching philosophies. 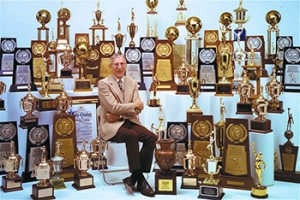 During his years as the coach at UCLA, he was able to get some of the best basketball players in the country to come and play for his team.  One of the things that I found most intriguing as I read about Wooden’s coaching was in how he began his season.  He was bringing in some of the best recruits in the country, there were many players who went on to careers playing in the NBA, and yet every season, no matter who was on the team, Wooden would start the first practice in the locker room talking about how players should correctly put on their socks and shoes.  He felt that you had to start at the absolute beginning with everything in order to make sure that the players on his team knew the expectations and procedures that were part of success for UCLA Bruins basketball players.

Every year at the beginning of the school year a new group of students walk into your classroom.  We have to look at each of those kids as our top recruits – we know that they are in the eyes of the parents who trust us to help their children learn and grow while they are here with us.

When Wooden got his top recruits, he could have easily gone straight to the basketball court to start working on offenses and defenses that the team would run throughout the year – I mean these guys all knew how to put on their socks and shoes, they had to have been successful players in high school to end up at UCLA.  But Wooden knew that expectations and procedures were the key to a successful season.  He started with the small things – socks and shoes.  Once they made it to the basketball court, much of their time in the early part of the season were on fundamentals – dribbling, passing, footwork.  Wooden understood that if you had a solid base of expectations, teaching players to play the game the way they needed to in order to be successful would be so much easier.

So, how do you spend your time at the beginning of the school year?  I know that it can be tempting to think that our students, most of whom have been “in school” for 5-6 years, know what is expected.  It can be easy to skip over the base level procedures.  Just like Wooden could have said that his players knew how to put on their socks and shoes, or they knew how to dribble, pass, and move their feet, we could assume that our students know how to line up, how (and when) to sharpen a pencil, how to work in a small group, etc.

But here’s the thing – it’s possible that the way you expect students to do some of these things is different than the way that a past teacher expected things to be done.

I am writing this post in late April, knowing that I’m not going to post it until the beginning of the school year.  In my role I have the privilege of visiting lots of different classrooms, seeing how different people spend their time, and seeing what people value.  One thing that I notice in April is that the teachers who have invested time throughout the year with the basic expectations – like Wooden did with socks and shoes – are currently (in April) having the most success with student behavior.

So, what are the things we need to teach on the most basic level?  Here are just a few ideas that come to mind:

What might you add to your list?  There might be expectations that are specific to your content area, or there might be things that don’t apply for your class structure.  In the last couple of years I was in the classroom, I created a 1 slide power point for each of these situations along with a few that were directly connected to my content area, and I would display them every time that it fit at the beginning of the year.  As the year went on, I would spend less and less time on the review, unless I noticed a pattern of issues.  Then we might review for a few days.  We would also spend some time reviewing each of the expectations after any break from school.  While this did not always solve every single issue, it helped in the long run, and by taking the time to create these slides in advance, it was easy for me to pull one up and display for my students.

As you prepare for your school year, what are the socks and shoes type of procedures that your students need to know about in order to be successful in your classroom?  After creating a list of expectations, think about the method that might work best for you to be able to teach your students those expectations.  It can be easy to assume that our students will know what to do, but they might not.  Maybe you will share your procedures in a power point slide like mine, maybe it’s something more involved like a student created video.  Whatever the plan is, take the time to think about how you can share your expectations with your students so that they truly know what to do.

For your students to be truly successful, they have to have a solid foundation.  What pieces of the foundation do you think you need to work on the most for your students to learn and grow in your class?  Share your ideas in the comments below – maybe your thoughts and ideas will spark an idea for others!